The Art of Athletics 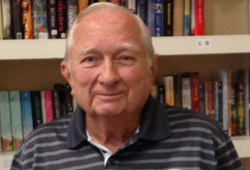 Time management can be a struggle for most college students. Having the freedom to decide what needs to be done when is not always easy. For Charles Horn, however, college was all about balancing time.

Horn graduated from Ohio University in 1949 with a bachelor’s degree in commerce from the College of Business. During his time at OHIO he played varsity basketball and baseball and also was involved in the Phi Delta Theta fraternity.

Horn came to Ohio University via a baseball scholarship in 1945. “I grew up in a small town where everyone played almost every sport. I always liked baseball and wanted to go where I could get a baseball scholarship as a shortstop,” he said. “I met Bob Wren and he talked to coach Peden on my behalf. Soon after, Peden wrote me a letter inviting me to attend OHIO.”

Being a scholarship recipient motivated Horn to establish a Charitable Remainder Trust (CRT) and name The Ohio University Foundation as beneficiary. He had been successful in the insurance industry after college and sees this CRT as a way to pay back Ohio University for everything it meant to him.

During his freshman year, Horn also was recruited to play basketball. Five of the varsity basketball players had been drafted into the war, leaving open spots on the team. Horn was selected to fill one of those spots until the servicemen returned. While he enjoyed his short time on the basketball team, baseball remained his true focus.

When asked how he was able to balance playing two sports, being involved in a fraternity and keeping up with schoolwork, Horn said, “You have to decide how you want to spend your spare time outside of the classroom. I chose to spend mine studying and doing extra-curricular activities that I enjoyed.”

Today, Horn is retired and enjoys painting, a skill he was taught by a former baseball teammate at OHIO. The catcher on the team his freshman year majored in art and Horn was amazed by his paintings. One summer they ventured to Amish country and spent the day painting the scenery. From there, Horn continued to develop his painting skills and enjoyed this new found love of art. He said, “I didn’t do much with it until after college. I started taking lessons and painting as a second career.”