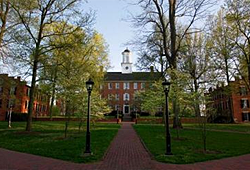 Lyndol Michael, an award-winning producer, theater artist, and alumna of Ohio University, is passionate about encouraging women playwrights to tell their stories. "Women's voices are disappearing from live theater," she says. "I am not willing to let that happen." To help the cause, Ms. Michael has contributed generously to support a scholarship endowment for women playwrights at Ohio University.

Ms. Michael attended Ohio University for a master's degree in broadcasting. She worked full-time at WOUB-TV and produced some pieces for the radio stations. "At WOUB I learned the value of a professionally staffed, student-operated environment. At that time (late 1960s), there were not many operations like WOUB in the country," she recalls.

While at Ohio University, Ms. Michael became deeply involved with Ohio Valley Summer Theatre (OVST), thereby initiating a life-long passion for community theater. "I later learned that the theater department's professor-directors were among the nation's best educational theater professionals. Through OVST I began to appreciate live theater as never before, and I joined the A.D. Players in Houston, Texas when I moved there in 1971." Her community theater involvement increased after a move to Orlando, Florida where she continued acting, serving on advisory boards, and directing productions for her church. Struck by a growing awareness of the scarcity of women's plays on stage, she decided to form the Women Playwrights' Initiative (WPI), a small nonprofit all-volunteer organization. The WPI was founded, according to the mission statement, "to foster the development and production of plays written by women, through educational outreach, workshops, readings and productions." Ms. Michael says, "That work as an arts administrator led me full circle, back to the origin of my interest in live theater working with OVST."

For Ms. Michael, giving comes naturally. Her mother was a model of charity. "She was the soul of generosity and a consummate caregiver." She also learned from her mother the importance of attending college. "Perhaps because mom was the first in her family to attend college, she was especially keen on helping others attend college and graduate." Ms. Michael's Christian faith also compels her to give back. "Spiritually mature Christians do not live for themselves. I'm a lifelong volunteer, and volunteers do not live for themselves. I was given private art and music lessons as a child; therefore, the arts get most of my attention."

In order to honor and encourage women playwrights of Appalachia, Ms. Michael founded the She Writes Plays! scholarship endowment. Ms. Michael has high hopes for the scholarship. "I intend for the gift to encourage other women to succeed, to write their stories for the stage," she explains. "Education and the best training can be financial dilemmas, especially when a writer is economically disadvantaged. Perhaps the endowment will help gifted women realize the dream."

As she began to think about her Will, a scholarship for women playwrights appealed to her. "I saw a need to make end-of-life decisions that will positively impact gifted women playwrights." This gift will not only allow Ms. Michael to improve the career chances of future female theater students, but she also hopes that it will raise awareness. "Awareness is one aspect of my objectives, and it's important that audiences understand this: women's voices are poorly represented on stages all over America." She says that women are either not writing plays, or are not writing enough quality scripts. Her scholarship will give nascent playwrights access to the necessary training and professional connections that are available through Ohio University's Playwriting Program.

But Ms. Michael was not content simply to make a commitment in her will and forget about it. In the process of working with the Ohio Foundation staff and the playwriting program to set up her bequest, a thought occurred to her. "Somewhere in the conversation, I realized I was talking about the future -- what could be a distant future -- because I'm healthy and my wishes wouldn't be carried out until my death. I asked Kelli to let me know if there was an immediate need, a woman whose current or next semester were impacted by the economic crisis and job loss. She contacted me with such a scenario earlier this year." As a result, a student who would not have otherwise been able to afford tuition was able to enroll.

Ms. Michael feels that women's active and equal participation is necessary for a healthy arts community, and she has given generously to make that vision a reality. If you have a cause you are passionate about, and you would like to support that cause at Ohio University, please contact Kelli Bell, Executive Director of Development for Gift Planning, at (740) 597-1819 or bellk@ohio.edu.

You might find it helpful to select the "print" button below and print this page. Feel free to give this page to your attorney. If he or she has any questions, please have him or her contact Kelli Kotowski, Executive Director of Development for Gift Planning, at (740) 597-1819, toll free at (800) 592-3863, or send an email to: kotowskk@ohio.edu.