Life Outside of an Ohio University Classroom 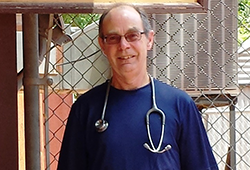 Michael Day, like many other high school seniors, was unsure of what career path he wanted to follow once he entered college. Then, he decided on a whim to witness a live medical operation for his high school’s career day. Surprisingly, on that day, he discovered what he wanted to do for the rest of his life: practice medicine.

After making this realization, Day enrolled in the pre-med program at Ohio University. However, he kept other majors, such as forestry, in the back of his mind in case the medical field was not for him. “I considered other options because I didn’t quite know if I was ‘doctor material,’” Day said. “The pre-med classes were challenging. I was not an outstanding student in high school and wondered if I could handle the courses.”

It turns out, he could. Day graduated from Ohio University in 1969 from the College of Arts and Sciences with a bachelor’s degree in biological sciences. He graduated from medical school at The University of Toledo in 1972 and served his residency at Methodist Hospital in Indianapolis, Indiana.

Day has made a planned gift to the university in support of the College of Arts and Sciences as well as established the Dr. Michael and Mrs. Marylin Day Study Abroad Award to support students who participate in an educational experience abroad. When asked why it is important to give back to Ohio University, he said, “Ohio University meant a lot to me; it provided me with a period of personal growth and a better understanding of the world.” Day says one does not give out of a sense of obligation but because of a “feeling that you want to give back.”

He was a family physician for most of his professional life and has now focused his time on volunteering and helping future doctors. He volunteers at Volunteers of Medicine, a free clinic near his home in Indiana, and is an Assistant Professor at Indiana University School of Medicine.

In Day’s recently published book, Lessons My Patients Taught Me: Memoirs of a Family Physician, he describes his experiences in medicine through the years. “I have always tended to look at medicine as something of a mission, or calling, and not just merely a way of earning a living. By sharing my experience and what I had learned, someone might at least get a few laughs, if not some inspiration” (p. 2).

Day hopes his support of Ohio University inspires students to learn more about the world outside of the classroom, as it inspired him.