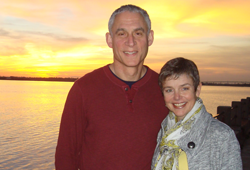 When it came to fulfilling a desire to give back, Dave and Cathy Levy didn’t have to think very long about why they wanted to support Ohio University.

“We decided to give because, frankly, giving to education just seems to make sense,” Dave said. “By endowing a scholarship, we can contribute something that will hopefully go on forever. It felt right to do something that will continue to make a difference for people for many, many years.”

The Levy’s gift is part of OHIO’s The Promise Lives Campaign, which will continue through June of 2015 and will focus on increasing scholarships through The OHIO Match, in which donations are matched $.50 on the dollar for existing and new scholarships. More details on The OHIO Match can be found inside.

The Levys were inspired to give because of their own college educations. Cathy attended The Ohio State University and graduated in 1986 with a degree in engineering. Dave received his degree in Mathematics in from Ohio University in 1978. Both of them received scholarships that made it a little bit easier to attend college. Therefore, when the matching program was introduced, the Levys were inspired to make a gift to establish the David P. Levy and Catherine A. Levy Scholarship and further support their scholarship with a generous bequest in their estate plans.

Undergraduate students enrolled in the College of Arts and Sciences will be eligible for the David P. Levy and Catherine A. Levy Scholarship.

With no children of their own, the Levys were adamant about being able to impact the lives of college students and give back to the universities that helped shape them into adults. Dave participated on campus as a resident assistant, teaching assistant and a cycling class instructor.

“Being an Ohio University student was a very important part of my growth as a person. When I entered, I was a kid, really,” Dave said. “When I graduated, I felt like an experienced, independent and well-rounded adult.”

Besides graduating second in her engineering class, Cathy played the trumpet in The Ohio State Marching Band. Both she and her husband are passionate about contributing to the education of future students—the kind of education that happens both in and out of the classroom.

“We thought it was equally as important to help students that don’t qualify for financial aid but still needed help paying for school,” Dave said. “With the price of college always rising, everyone needs help and we are so grateful to have this chance to pay it forward.”