A Family Tradition of Giving Continues 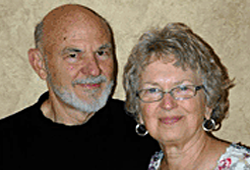 Have you ever wondered how you can keep your children engaged in the issues your family is passionate about? Mary Anne and Don Flournoy are sustaining a tradition of service within their family through their Sugar Bush Foundation, a supporting organization of the Ohio University Foundation.

The Sugar Bush Foundation was established in 2005 to improve the quality of life in Appalachian Ohio by encouraging civic engagement and by fostering sustainable environmental, socio-economic, and human development. An additional but unstated purpose was to impart the values of charitable giving to future generations of family members.

Since they came to Athens in 1971, Don and Mary Anne Flournoy have been donors to Ohio University and to such local community organizations as Rural Action, Good Works and Planned Parenthood. While living on their Sugar Bush Farm and working at the university, they modeled to their children how to be good citizens of the community and conscientious stewards of the environment.

Blessed by a profitable investment in a family business, and animated by a desire to give back, the Flournoys searched for a gift vehicle that would enable the on-going participation of the whole family.

The Flournoys also liked the arrangement because it enabled them to institutionalize family giving. Named after their family farm, the Sugar Bush Foundation became an expression of the shared values and commitment they felt. Don and Mary Anne and their adult children, Hylie and Eli, all sit on the Sugar Bush Foundation board, joined by five board members appointed by the Ohio University Foundation. The non-family board members were selected to provide a diverse perspective for better decision-making.

A goal of the Sugar Bush Foundation is to catalyze the resources of the university, as a center of innovation and research, for the benefit of the wider community, while enriching the university's knowledge and involvement in the region. One of the Foundation projects was the Sunflower Project, an initiative that provided funds for the Department of Mechanical Engineering to work with the students and faculty of a local alternative high school developing the technology for distilling bio-fuels from locally-grown sunflowers. This project is simultaneously a "problem solving" vocational education initiative for students and a "green" experiment in sustainable energy production within the local community. Another of the proposals funded was the "Green House" Project in which local landlords were given incentives for making energy audits and utility upgrades to student rentals. Ohio University's Office of Sustainability and a local community action organization collaborated in the energy-saving initiative.

The Flournoys believe that life is meant to be lived in service, and their Sugar Bush Foundation reflects that conviction. Despite the fact that Hylie's and Eli's families do not live in Athens, the Sugar Bush Foundation provides a common cause in which family members can be engaged over time. Charitable giving has become central to the family's identity, and has now spilled over to Don and Mary Anne's grandchildren, who are also learning the joy of being able to give back.

By creating a supporting organization, the Flournoys have enriched their family, their university, and their community while doing good. If you might be interested in funding a supporting organization associated with the Ohio University Foundation, or if you have questions, please contact Kelli Kotowski, Executive Director of Development for Gift Planning, at (740) 597-1819, toll free at (800) 592-3863, or send an email to: kotowskk@ohio.edu.