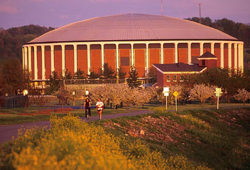 If you hang out around the Convocation Center during Ohio University’s basketball season, the name Grover will not be strange to you. The Grover’s legacy of giving to Ohio University is one that is familiar with students, faculty, and alumni who love OHIO Athletics.

Tad’s wife, Ann chose to honor Tad and his family by setting up a gift to support the renovation of the Men’s Basketball Locker Room. The project was a fundraising initiative aimed at upgrading the Men’s Basketball facilities that will propel Ohio Men’s Basketball into the future. Following the 2012-13 season the locker room was completed with brand new lockers, carpet, graphics, ceilings and lighting, a new entertainment system, updated electronics and a renovated team meeting room to include theater style seating and a smart board.

Tad graduated from Ohio University in 1950 with a Bachelor’s Degree in Agriculture. He made his living in Athens as the President of Bank One, Athens National Bank, and Chase. He was a staunch supporter of Ohio University and was on the University’s Board of Trustees, The Ohio University Foundation Board, and also the Ohio University Inn Board. Athens is also where he met Ann, who is a graduate of the University of Kentucky. Their combined support for the Men’s Basketball program is well-known, becoming a united front of giving. Giving is a large part of the Grover’s family mission.

“I am simply giving back to the University for all the opportunities it has given the Grover family,” Ann says. She says it’s especially appropriate to give to Men’s Basketball since it was such a large part of Tad, his father’s, and her lives.

Ann embraced the love that the Grover family has shown to Ohio University and OHIO’s Men’s Basketball. She was given the title Honorary Alumni for her strong support. In honor of her gift, the Men’s Basketball Ready Room is named in Tad’s memory.

If, like Mr. and Mrs. Grover, you have a personal connection to a segment of students at Ohio University and you would like to support them in your will, please contact Kelli Kotowski, Executive Director of Development for Gift Planning, at (740) 597-1819, toll free at (800) 592-3863, or send an email to: kotowskk@ohio.edu.