OHIO through a Camera Lens 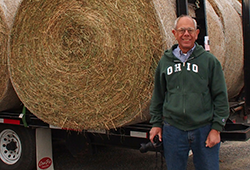 In ninth grade Terry Shuchat fell in love with the photography industry when he began working for a camera store in his hometown of Palo Alto, California. It wasn’t long before he became determined to own a camera store one day. But an education came first.

“Where I grew up, you were expected to go to college. It was something I had to do, but it was also something I wanted to do,” Shuchat said.

Shuchat attended Willamette University in Salem, Oregon with the dreams of receiving a degree in photography. However, the school didn’t offer such a degree so he looked beyond Oregon. Out of all the colleges Shuchat researched, Ohio University was the only four-year school that that met all of his requirements. He graduated in 1962 from OHIO’s College of Fine Arts with a bachelor’s degree in photography.

Shuchat was required to join the ROTC program for two years at Willamette. When he transferred to OHIO, he stayed in the program because it gave him more control over his future in the military. At age 21, Shuchat was in charge of an Air Force photography lab with 25 workers. He stayed in the Air Force for three years and said he is grateful for the time he served. “It taught me skills about managing people that I use in my business today,” Shuchat said.

Shuchat continued to develop his idea of owning a photography store while he served. This idea became a reality after he was discharged: He and his business partner opened Keeble & Shuchat Photography in May, 1965 in his hometown of Palo Alto, California.

“I was fortunate that my parents paid for my education, and my wife and I were able to pay for both of our daughters’. It is tough enough to start life after college, and leaving school owing money makes it a lot tougher,” Shuchat said. “I appreciate what Ohio University did for me, and any little bit where I can help the students, I will.”