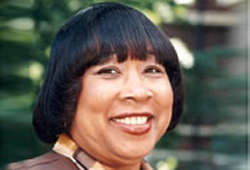 As a student at Ohio University in the 1960s, Dr. Patricia Ackerman minored in education, but she has spent her entire professional career as an educator. She taught English-- her major-- for eight years, and then served as an administrator for the next twenty-five years in the Cleveland Heights-University Heights City School District. Given her affinity for her alma mater and the fact that she had devoted her life to education, she was well suited to promote the cause of higher education at Ohio University. Yet, in her early career, she did not foresee that she would ever have an opportunity to serve in an official capacity. She had been back to Athens once for Homecoming, but other than that, the extent of her relationship with her alma mater extended to eagerly welcoming fellow Bobcats to her work place, and persuasively informing graduating high school seniors of Ohio University’s strengths. Her service to her alma mater in a purely informal capacity began to change. In 1988, she was invited back to Athens to be the speaker for the first black baccalaureate ceremony, a special program for black faculty and students and forerunner of the pre-graduation ceremony.

Later that same year, Dr. Ackerman made a name for herself when she met with President George H. W. Bush in the White House. Since the president was hosting an education summit, she was invited to give testimony in her role as President of the National Alliance of Black School Educators, the largest such association in the United States. She also met then-Governor Bill Clinton, education chair of the Board of Governor’s Association. In 1990, she was invited to speak at the Black Alumni Reunion, and her speech was so well received that the Alumni Association issued it as a booklet for all who attended the reunion. The College of Arts and Science recognized her in 1994 for her professional achievements. Later in the Fall of that same year she had the honor of receiving a call from Ohio University President Robert Glidden, who wanted to recommend her to the governor for appointment as a university trustee.

She felt honored that she was valued in her professional capacity as a K-12 administrator who could contribute insight into the kinds of issues that students and parents deal with when preparing for college. In 1995 she was appointed to a nine-year term on the Ohio University Board of Trustees, which lasted until 2004. The Bicentennial Campaign occurred during her tenure, and she felt compelled to do her part to give back. As an educator, sitting on the Board of Trustees with rich and powerful people was daunting, since she knew she could not possibly give back as impressively as they. But she wanted to do something. Having also served on the OU Foundation Board of Trustees, she was aware of the university’s fiscal picture. Above all, she was concerned that relatively few African Americans were involved in philanthropic giving to Ohio University.

When she had the opportunity to speak at the Black Alumni Reunion during her tenure as trustee, she suggested to the assembled alumni that they needed to increase their giving. She understood that some alumni left OU with a bitter taste in their mouths due to negative experiences as a minority at the university. But she advised that for all of them, no matter their past experiences, their college years were formative and established the foundation for what they had become. Even if the alumni believed the educational system they experienced had not been designed for them to succeed, they should memorialize the fact that they defied the system and exceeded all expectations. Dr. Ackerman proposed the idea of the African American Alumni Heritage Wall, located in the lobby of Templeton Blackburn Memorial Auditorium that now bears her name. The wall was an opportunity for black alumni to thank and honor those who made their degrees possible. Plaques displayed include the names of graduates and those who helped support their matriculation at Ohio University. The Wall seemed an appropriate addition to the renovated auditorium, which was named for the first African-American graduates of the university. Funds remaining from her gift were used to pay for a computer room in the cultural center located in Lindley Hall, now housed in Baker Center. Both the lobby and computer room were named for Dr. Ackerman as a result of her gift.

In 2004, as Dr. Ackerman’s term on the Board of Trustees was winding down, she realized her philanthropy was not finished. Her last official act was to serve on the presidential search committee, which selected Dr. Roderick McDavis as university president. Upon his appointment she discussed with him the significance of his leadership and what might be done to memorialize it. Ultimately, the Urban Scholars Program, a merit- and need-based scholarship program targeted to high school graduates of urban school districts in Ohio, was the result.

Dr. Ackerman felt like the progenitor of the Urban Scholars Program, and she felt that it represented an important step for people like herself. She personally graduated third in her high school class, but even though she was an excellent student, she did not receive even one semester of scholarship awards. Dr. Ackerman’s experience as a student and as a high school administrator enabled her to realize that, while the very top tier of students is naturally recruited by all institutions, the second tier of very dedicated and talented students often gets entirely neglected. They are strong students and going to college anyway, but they need help. Dr. Ackerman envisioned this as the band of students—who have the ability but also have financial difficulty—that the Urban Scholars Program would target. She contributed what she could to help establish the program.

Dr. Ackerman funded these projects through a beneficiary designation of life insurance to the university. This sort of gift is not a one-time deal. Rather, it is a lifetime commitment. She continues to make the annual premium payment on her policy. But this is a financial burden she is happy to bear.

Having been the first black woman to serve on the Board of Trustees and to serve as Chair, she felt she needed to model giving for other black alumni. Establishing the wall and the named lobby function as a recruiting tool. The lobby, which is on the orientation tour, makes a statement to incoming minority students that they can aspire to something extremely worthwhile. Dr. Ackerman envisions that the wall says, “Our matriculation at Ohio University was significant, and whatever success we have achieved owes something to this place.” And her contribution to the Urban Scholars Program makes some of those incoming students’ lives a little bit easier. Dr. Ackerman continues to encourage alumni to memorialize their unique college experience. While she addresses this message specifically to black alumni, the same can be said for all who graduate from Ohio University: “There is a piece of you in Athens, and you need to find that piece and memorialize it.”

If you would like to learn more about giving back to Ohio University, please contact Kelli Kotowski, Executive Director of Development for Gift Planning, at (740) 597-1819, toll free at (800) 592-3863, or send an email to: kotowskk@ohio.edu.